This impressive list of accomplishments seems near impossible, yet Amanda Cha has somehow managed to do it all (simultaneously) as an undergraduate student at UCalgary.

It is clear why the Department of Philosophy nominated Amanda for the 2020 Rhoda F. Blythe Philosophy Undergraduate Scholarship, an award based primarily on noteworthy philosophical aptitude, as well as academic achievement.

Amanda is also the winner of our 2020 Brian Grant Undergraduate Philosophy Essay Contest, and recipient of the affiliated undergraduate award. A committee of three Department of Philosophy faculty members unanimously nominated Amanda’s essay “Is the International Association of Athletics Federations Disabling Caster Semenya?” for the award via an anonymous judging process.

We asked Amanda a few questions about her interest in philosophy, the awards, and her plans for next year:

Why do you enjoy studying philosophy?

What I find most interesting about philosophy is not actually the philosophy itself, but myself when studying it. By questioning the ways of our lives, the societal systems or rules we follow without much thought, I feel more…liberated, perhaps? Whether or not I change my beliefs or the way I live, I feel less mentally numb. As well, the refreshing feeling I get when I’m trying really hard to construct or deconstruct an argument – I find that pretty fascinating, too.

Which philosopher do you find most interesting, and why?

I’d say Diogenes, partially for his philosophy, and mostly for his way of life. I see how we are fed expectations of “success” in various stages of life from talks, articles, social media, etc. I hope to get some of his energy to question and step away from harmful social expectations.

The essay examines whether the International Association of Athletics Federations’ (IAAF) testosterone-reducing regulations are disabling Semenya, using the disability framework Social Model as Human Variation (SMHV). To put it briefly, IAAF requires female athletes with abnormally high testosterone levels to receive chemical suppression to be eligible to compete in certain track competitions. For athletes like Caster Semenya, who have naturally higher testosterone levels due to genetic abnormalities, they must artificially lower their blood testosterone to a certain level under the regulation. I conclude that SMH would deem IAAF’s regulations as disabling athletes like Semenya.

I developed the essay from a term paper I wrote for the Philosophy of Disability course taught by Dr. Delehanty. I had been contemplating the case of Caster Semenya long before the course began. After reading about it in an article, I became interested in the ethics of regulating certain characteristics in professional sports, where we see a wide spectrum of physique and ability due to genetics or training.

What does receiving these philosophy awards mean to you?

Both awards are a big confidence booster. As someone who immigrated to Canada, and struggled with English, I have been very insecure about showing my writing to others. In first year, I even hesitated to major in Philosophy because I believed that I would not be able to thrive in this writing intensive degree. These awards gave me an encouraging push, showing that my efforts so far have proven fruitful, and helped me finish strong in my last year of the degree.

What are your plans following graduation this year?

I plan on attending law school this fall. I haven’t decided on the school yet, but I’m excited to stay in school and continue studying. 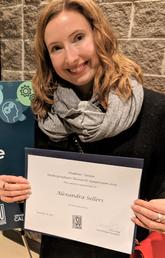 Undergraduate award for research on the ethics of currency