Can you tell us a little about yourself and how you chose to do your PhD in the Dept. of Political Science at the University of Calgary?

I thought this department had a solid comparative politics stream. I also really wanted to work with Dr. Pablo Policzer because I knew he had done work in Latin America and the Caribbean.

You’re almost done your PhD thesis: what is your dissertation about?

My project attempts to explain the cause of the divergence in regime change between Haiti and Nicaragua. Haiti experienced a political transition when Father Jean-Bertrand Aristide won the first free and fair elections in the 1990s. But Aristide was overthrown just seven months after taking power. Nicaragua followed a similar trajectory, but the transition survived. 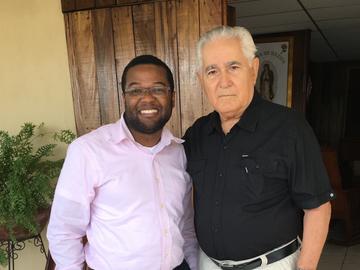 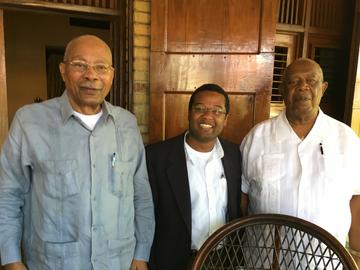 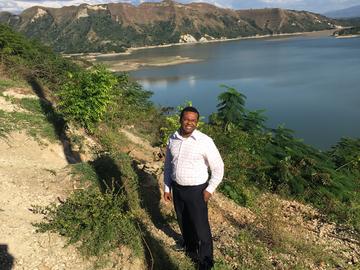 1. Eden Pastora nicknamed Comandante cero (commander zero) was a former Sandinista commander, famous for conducting a major operation against the Somoza regime in the late 1970s. He and a group of rebels held lawmakers captive for several hours until the government agreed to several demands; 2. Former party leaders Serge Gilles of PANPRA (the Haitian Revolutionary Progressive Nationalist Party) and Victor Benoit General Secretary of the National Committee of Democratique Movements (KONAKOM); 3. Managua (capital of Nicaragua). I really like this picture, the mural of Hugo Chavez, the former Venezuelan president is a reminder of the influence of the leftist movements that swept some countries in Latin American in the 1980s and 1990s (the left turn); 4. Northern Haiti during a trip to interview the leader of the Mouvman Peyizan Papay (Papay Peasant Movement) Chavannes Jean-Baptiste

Your field work turned out to be more challenging than expected! Tell us about that.

My fieldwork in Haiti was a success. In Nicaragua, things were more complicated. When I arrived in Nicaragua, there were protests, roadblocks, curfews, etc. I was advised by my contacts to leave the country for my own safety. At first, I resisted because I had invested quite a bit of preparation, resources, and time. Things got worse; my participants refused to give me interviews because of the situation. I had no choice but to return to Canada.

I am still exploring my options!

To find out more about our paper prizes and past prize winners, visit Department Graduate Scholarship and Awards.