I started work on Henry G20 in 2014, when I was part of the Stratford Festival’s Directing Program. I was looking at Shakespeare’s war plays and exploring whether I could locate them within the contemporary context. At that time, we were only two years out from the abrupt and violent shut down of the Occupy Movement; Black Lives Matter was beginning to emerge in the collective consciousness after the murder of Trayvon Martin; the Truth and Reconciliation Commission was in full swing; and the G20 protests had only just happened four years earlier. Social strife, abuse of power, and oppression of the marginalized was alive and well—as was the social justice movement. The play was originally an interrogation of the largest mass arrest in Canadian history and the massive violation of the Charter Rights.  It started as a tribute to, and docu-drama about, the protest movement and the activists who have committed their lives to protecting this important piece of democracy. Henry is a young black activist and is inspired by real-life Canadian activists Naomi Klein, Sharmeen Khan, and Jaggi Singh.

The events of the past year, however, have asked us, as creators, to look closely at how protest is being used and by whom. Specifically, protests by the alt-right movement have been frightening and disturbing, and have caste a critical lens on the dark potential of runaway populism. In the past year, we have witnessed events where protest is a tool for facism rather than social justice. With this framework in mind, I and co-writer Constantine Anastasakis knew we needed to bring the focus of the play to the urgent conversation of over-policing of racialized communities and, specifically, the question of accountability.

“Henry G20 is a bold retelling of the conflict between police and protestors during the G20 Summit in Toronto in June 2010. Writers Christine Brubaker and Constantine Anastasakis have adapted Shakespeare’s Henry V, replacing the battle between the French and English with the battle between protesters and police on the streets of Toronto. At the heart of the play is Henry, a young female grassroots organizer. As she leads crowds of protesters - the activists, the idealists, the unionists, the partiers, the families and civilians - into the fray of downtown Toronto, she and her marchers encounter an unexpected battle ground, never seen before on the streets of Toronto.” 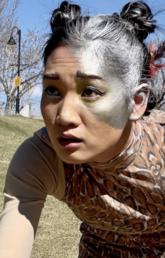