This story is Part 5 of a five-part series highlighting the University of Calgary’s strategic research theme, Energy Innovations for Today and Tomorrow(download pdf), and the recipients of the Vice-President (Research) Matching Funds to Advance Energy Research. The series will run May 5-9. To read the rest of the series, click here.

A team of six University of Calgary researchers has been awarded funding for their project, Cost Effective Biotechnology for Carbon Capture and Re-Use. Their research is based on the concept of using algal biotechnology to capture and reuse carbon from gasses emitted from burning fossil fuels.

“We aim to capture carbon from stack gases, which are generated when you burn fossil fuels for energy at power plants or operations in the oilsands. They generate gas with a lot of carbon dioxide, and we capture that biologically with algae,” says principal investigator Marc Strous, professor in the Department of Geoscience at the University of Calgary. “The aim of our project is to create a new process for this that is cost-effective compared to current technology. That’s the current bottleneck: it’s possible, but expensive.“

Current algal biotechnology pushes stack gases through diluted algae held in large cement holding tanks, requiring a great deal of power. To process the diluted algae into bioenergy, it must be concentrated in a centrifuge, another costly process. The group hopes that by making the process more economical, it will become a realistic alternative energy option. “If companies take on our technology, they will reduce the carbon footprint of the existing energy industry, and bioenergy will be an alternative source of electricity for consumer use,” says Hector De la Hoz Siegler, researcher and assistant professor in the Department of Chemical and Petroleum Engineering.

Three primary strategic changes to the carbon capture process
The team will use three innovative strategies to reduce the cost of the process. “First, we will work at very high levels of pH and alkalinity, which helps the CO2 to dissolve more easily. We also add carbonates as a pH buffer, which theoretically improves the whole uptake of the CO2,” says Strous. “Secondly, we grow the algae on a plastic surface as a bio film, so we get very nimble bioreactors that can be constructed inexpensively, and the concentration is also much easier.” Instead of concentrating with a centrifuge, the algae biofilm is scraped off the plastic surface, requiring little electricity.

The third strategy involves using communities of microbes instead of single strains. Single strains lack the resilience of algal communities to withstand harsh Canadian climates. “The climate for algal biotechnology in Alberta is great because we have sunshine, but the challenge is that the temperature is never high consistently, so you need a biology that can cope with big temperature swings, day to night, winter to summer,” says Strous.

“We’ve identified some sites in Canada where we should have these biological resources, and we’re going to start off by looking at them and seeing if they can be used in the technology,” adds Peter Dunfield, researcher and associate professor in the Department of Biological Sciences.

Potential to help the environment and diversify Alberta’s economy
The potential environmental impact of industry adoption of this model is significant. “We’re absorbing CO2, and the algae is taking that and converting it to 02, or clean air. We are reducing the greenhouse effect,” says Joenel Alcantara, researcher and adjunct assistant professor in the Department of Microbiology, Immunology and Infectious Diseases. “The CO2 is converted into biomass, and the idea is to use that biomass as an energy source. That will reduce dependency on coal and gas, and instead put it on a renewable energy,” says Strous.

“We selected this project for funding because it embodies the Energy Innovations themes of discovering new sources and planning for the future,” says Chris Clarkson, strategic research theme leader of Energy Innovations for Today and Tomorrow. “It also highlights the role of biology and medical science in the energy industry, areas that will grow in importance as the industry diversifies. The University of Calgary believes this interdisciplinary approach can lead to significant advancements in energy research.”

The researchers see this project fitting into the goals of the provincial and federal governments to diversify Alberta’s economy beyond fossil fuels. Graduate students and postdoctoral scholars involved with the project will be prepared to work in this new economy. “It’s about capacity building, not only in terms of infrastructure, but also building up University of Calgary students for success. We want a diverse base of bright, innovative and curious students that want to take this project to the next step and tackle these world problems,” says Alcantara.

The Academic Plan (download pdf) and the  Strategic Research Plan (download pdf)  are the roadmaps through which the University of Calgary will achieve its Eyes High strategic direction to become one of Canada’s top five research-intensive universities by 2016, grounded in innovative thinking and teaching, and fully integrated with the community of Calgary. In addition to the theme of Energy Innovations for Today and Tomorrow, the university is building strength in five other multidisciplinary strategic research themes: Brain and Mental Health; Human Dynamics in a Changing World; New Earth-Space Technologies; Engineering Solutions for Health; and Infections, Inflammation and Chronic Diseases in the Changing Environment. 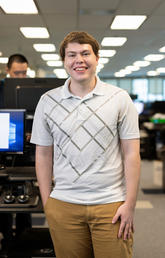