Leo West and Barb Belcourt were impressed with the growth their students displayed after the forum.

Many young people living in the numerous small communities that dot the Alberta map do not consider post-secondary education to be a viable option. The Werklund School of Education is working to change this through its annual Indigenous Youth Forum. 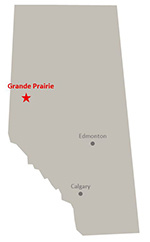 “The STEM-based activities included a new game coding task where students collaborated to manipulate code in efforts to improve the performance of a computer game,” explains Anthony Hampshire, project relationship specialist. “As well, students participated in hands-on workshops at TELUS Spark that required them to create a solution to a problem. All of these elements are consistent with learning experiences in the Werklund School Bacherlor of Education program.”

One of the hands-on workshops at TELUS Spark allowed students to team up and create a workable solar fan, iPhone charger or camping oven prototype. Werklund School instructor Shirley Pepper says the forum was revised this year to provide new experiences and reflect lessons learned.

"We realized after last year’s forum that students needed to be reminded of their talents and gifts in order to build confidence. This year’s focus was on helping students recognize their strengths and passions.”

Leo West is the vice-principal at Mistassiniy School and says the forum achieved this goal: “I can definitely see a change in the confidence of some of my students. When they came here they felt really welcomed. I don’t think that they realized people at the University of Calgary, outside the reserve, are really rooting for them and trying to give them opportunities, so when they came here and had these people working with them, talking with them, I think it made them feel really important and worthwhile.”

Confidence was also a subject Blackfoot Elder Kelly Good Eagle Sr. explored with the students. Good Eagle says he could see that some of the students wanted to come out of their shell but felt unsure at first.

“I always tell them to try, try, try, if they fall down, get up and keep going. I told them, there are so many different people here who can help. They have fellow students, they have the Native Centre, and especially the faculty. Dare to ask,” he says.

In addition to going on to post-secondary education in a few years, organizers hope the students will use their talents and increased confidence to immediately make a difference in their communities.

Barb Belcourt is the First Nations, Métis, Inuit liaison worker/Cree instructor at Hythe Regional School and says she witnessed this with a number of the students who participated in the forum last year. “One young gentleman brought his ideas back and tried to implement what he learned and was successful in some areas. The other boys basically followed him, so his success was theirs as well.”

During an action-planning session, this year’s participants shared ideas for using their strengths and interests to make a positive impact and viewed Alanna One Spot’s REDx talk What I know Now for inspiration.

“I learned about how I can have a small idea and have a big outcome,” shared one student in the forum’s exit survey, regarding the value of these discussions.

“It takes teamwork to make things work,” wrote another.

This year’s event nearly doubled in size to 32 students, with 12 of the original 18 returning from last year. Organizers and teachers were pleased to see the returning students acting as mentors for the first-timers.

Belcourt says one student, who she describes as shy and introverted, removed herself from their group and took a leadership role with another group while at TELUS Spark. “I was blown away and am so proud of her. I think that mentorship role worked in that respect.”

This young woman’s actions are especially noteworthy for Belcourt as she intentionally selected certain students for the experience.

“The students I chose last year, as well as this year, are more of the ‘underdogs.’ They’re not academically high, nor is their attendance good, but by bringing them I thought they would see that there is something bigger out there for them than what they see at home. The world is quite big, and it’s beautiful.”

Good Eagle agrees, saying education is key to success: “I’m glad that you’re bringing students from all over. I’m really glad that they have the opportunity. I always push education. Doors will always be open for anything you want to do and there is so much potential once you get the education.”

i’ taa’poh’to’p, the University of Calgary’s Indigenous Strategy, is a commitment to deep evolutionary transformation by reimagining ways of knowing, doing, connecting and being. Walking parallel paths together, ‘in a good way,’ UCalgary will move toward genuine reconciliation and Indigenization.