Calgary Institute for the Humanities event on Aug. 26 to feature UCalgary author and professor Joshua Whitehead

Some of the country’s most important Indigenous figures in poetry, literature, music, and activism will be setting the tone for Calgary’s Pride Week this month.

The topic of the August 26 event will be the intersection of art and activism for queer, trans and Two-Spirit Indigenous artists. “Sometimes the 2S+ gets left out when discussing LGBTQ issues,” says UCalgary English professor and CIH director, James Ellis, who points out that homophobia was among the many insidious legacies of Canada’s colonization of First Nations people.

Prior to the formation of residential schools and the aggressive proliferation of European Christian influences, being gay, or Two-Spirit, was never stigmatized in First Nations culture, he says. In fact, Two-Spirit people in pre-colonial societies were honoured as visionaries, leaders, and healers with important spiritual responsibilities.

“In light of the recent discoveries this summer and the importance of addressing Indigenous issues in the name of reconciliation, we thought it was particularly important to host emerging voices from the Indigenous community this year,” said Ellis.

“It’s great to see a resurgence of Indigenous voices coming back to the arts. Our panelists this year have won some of Canada’s highest awards and are important figures in their own right.”

Belcourt, a writer and academic from the Driftpile Cree Nation, is an assistant professor at the University of British Columbia’s creative writing program, a former Rhodes Scholar, and the youngest ever winner of the Griffin Poetry Prize.

And Edmonton-based Two-Spirit musician Shawnee Kish has graced the stage with artists including Lady Gaga, Madonna and Alicia Keys.

While the University of Cagary has been a partner of Calgary Pride since 2016, the university’s history as a forum for progressive conversations on LGBTQ rights dates back to the 1960s. But it’s only been as recently as the past five years that Pride movements have started to acknowledge the various intersectionalities under the rainbow, says Calgary Pride’s manager of production and programming, Sumit Munjal.

“Our intent is to ensure the voices and opinions of folks from all marginalized communities, including immigrants and BIPOC, are reflected in the programming and how we engage with the community. It’s part of the overall ethos of Calgary Pride,” said Munjal, a UCalgary alum who graduated in 2019 with a degree in communications and media studies. 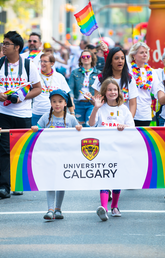 The Best of Calgary Pride Week Events for 2021