While on campus for two weeks of summer courses during the final year of her Community-Based Bachelor of Education (BEd) program, Cindy Engel would step out to phone her 91-year-old father in Medicine Hat to remind him to go down to the dining hall of the seniors' complex where he lived to eat his meals.

Engel’s father was afflicted with Alzheimer’s disease and with her support was trying to continue to live independently.

“I promised him he would live with dignity,” she says. “My profs were very understanding when I mentioned that I may need to take calls from my dad when he was confused or needed to know what to do next.”

Caring for her father was a laudable undertaking, but one that almost required the mother of two to put her goal of becoming a teacher on hold.

After working as an education assistant for 10 years, Engel took the plunge and enrolled in the BEd program. When her father first became ill, she regularly travelled from her acreage in Rosemary to Medicine Hat and eventually moved to be closer to him. 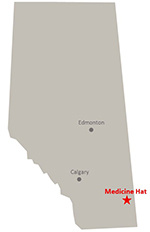 “I would not have been able to continue my degree if it wasn’t for the community-based program. Moving here to support him and be with him would have ended my dream or at least stalled it, that’s for sure.”

Attending to her father is just one example of Engel’s positive impact on her community. During her decade as an education assistant, she excelled in her duties by supporting hot lunch initiatives, researching grants to fund school health projects and participating in district committees.

Above all else, Engel considers assisting students with differentiated needs to be most gratifying.

“It is just so rewarding. Those ‘a-ha’ moments when something clicks for them and they move on to bigger and better successes as they mature. The smiles they give you when they see you, when they learn something, or do something on their own for the very first time. And of course the hugs!”

Engel’s sons celebrated her birthday with flowers during a Junior A game in Ontario.

As fulfilling as this role was, she knew she could help even more as a teacher.

After graduating in 2018, Engel’s first year of teaching saw her substituting in schools throughout the counties of Cypress and Newell; currently she is teaching kindergarten and working with specialized students in Grades 1 to 12 at Herald School in Medicine Hat.

“I feel that I belong in this school. I help with the breakfast program, am on a committee working to revamp the kindergarten district report card and am the ‘health champion’ for our school,” she says. “I was successful in a seed grant application to build a quiet sensory-type room with a loose parts area for some of our high flyers to take a minute to calm themselves or to regroup before heading back to class.”

“You are my sunshine and my nightlight at the same time,” reads the mug a student made for Engel.

Giving back to the community

Despite all these extracurricular activities, Engel still found time to help her community by billeting two hockey players for the season.

“My boys had some great experiences at their billet families in Alberta as well as in Ontario while they played Junior A, so I decided to give back to the hockey community here,” she says.

The importance of sharing her time and volunteering is something Engel says her father instilled in her. “I have always been involved as a volunteer; my dad was always involved. I think that is just part of who I am.”

When considering the future, Engel first reflects on the recent past: “2018 was a year of many things: I turned 50, I graduated, I got a job and lost my dad all within a few months. My nieces say, ‘Grampa waited to see you graduate.’

“I hope to end up in a classroom support role of some shape or kind eventually, but honestly, subbing is great as well, so wherever my career journey takes me, I will be on that road for awhile.”