Exploring the coping strategies of students with Autism Spectrum Disorder

Bullying is a persistent challenge for many children, associated with numerous long- and short-term consequences. Students may be victimized by their peers for a number of reasons, but those in vulnerable populations, such as students with exceptionalities, may be particularly at risk. For instance, students with Autism Spectrum Disorder (ASD) may experience rates of bullying that are four times higher than their typically developing peers.

Students with exceptional needs often occupy a lower social status in school settings, making them susceptible to bullying from ‘higher status’ students. ASD is frequently associated with difficulties with peer relationships – such as in making conversation and social awareness – and these students are often targeted as there is little risk of retaliation. Thus, while these students are often the victim of bullying, they often lack the social skills and support to address it effectively.

Working with 38 adolescents with ASD, Dr. Adam McCrimmon investigated the coping strategies these students generate when confronted with bullying situations. Using online scenarios, these students shared their responses to the various forms of bullying presented in animated videos. Their responses fell into three categories: actively trying to change the situation (approach strategies), avoiding the situation and the stressors associated with it (avoidance strategies), and uncertainty based on the various factors and complexity of the scenario.

In trying to change the situation, students commonly reported seeking social support from adults. Students also reported that they would try to stand up to the bully, using ‘comebacks’ and strategies described in social skills intervention resources for students with ASD. Only seven students reported trying to problem-solve the situation themselves with creative and peaceful means. In contrast, eleven students suggested externalizing behaviours, such as physical aggression, revenge, etc.

Avoidance strategies such as ignoring, walking away, and avoiding the bully represented more ‘passive’ responses to the situation. Instead of addressing the problem, fifteen students reported trying to “not listen” to the bully, or to endure the bullying until it subsided. Twelve participants discussed hiding and using various means to avoid contact with the bully, either as their first response or after other strategies proved ineffective.

The third theme highlighted the complexities of bullying and the difficulties that make coping with victimization additionally challenging for students with ASD. Eleven participants identified that selecting a solution is not always straightforward and that bullying may continue after using the strategies. Other participants reported being unsure of which strategy to select and spoke to the realities of bullying that may seem uncontrollable.

Dr. McCrimmon’s research emphasizes the need to help students with exceptionalities select and balance short-term and long-term strategies and goals to address bullying. Given that many students with ASD struggle with social skills, executive function, and emotional regulation – all of which support effective coping – this support is particularly important. The study’s results indicate that the students’ response to bullying is often based on their prior experiences with victimization and the results of their past efforts to address it.

Addressing issues of bullying requires other stakeholder involvement, beyond just the child’s own coping strategies. Understanding the context, the relational nature of bullying, and the unique perspective of each student is essential to this process. Supportive adults must also be prepared with appropriate responses on how to help students who approach with them with concerns of being bullied; promoting a positive school climate, which fosters empathy and understanding among students, is a considerable facet for in-school intervention. Dr. McCrimmon is currently pursuing effective interventions for students with ASD who experience bullying. 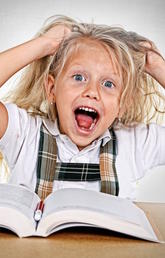 Fourteen signs your daughter may have ADHD

Quick Chat: The Stigma of ADHD