UCalgary Across Alberta: Erik Burow looks north to pursue dream of being a 'cow vet' in Alberta’s Peace Country

When asked why he chose to launch his veterinary career in the town of Peace River, about a five-hour drive north of Edmonton, Erik Burow lists three compelling reasons: family, mentorship, and the incredible beauty of Peace Country.

“We're interested in carrying on the family farm one day and want to be closer to my wife’s parents,” says Burow, who graduates June 3 from the University of Calgary Faculty of Veterinary Medicine (UCVM). “Also, I've been coming up here for five years and just fell in love with the nature. The Peace River valley is beautiful. So, yeah, I was happy to drive north and find a job here.” 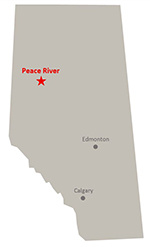 Although Burow didn’t grow up on a farm, he had lots of contact with creatures great and small, experiences that influenced his career choice. “Most of my part-time jobs were animal related. I've worked at some barns and ranches and pet stores and kennels,” he says with a laugh.

“I ended up pretty sure I wanted to be a veterinarian shortly after high school.”

The new veterinarian hopes to specialize in beef cattle medicine in the future. He credits great mentors for fuelling this interest. One of them is Dr. Cody Creelman, a feedlot and cow-calf veterinarian at Veterinary Agri-Health Services, who is something of a social media sensation with about 44,000 followers of his Cody Creelman, Cow Vet YouTube videos, some of them featuring Burow.

“I've been spending time on weekends and after hours with Cody since first year. I lived in Airdrie during vet school, and I was five minutes from his clinic. Another student suggested I call him if I wanted to help out with calving calls and stuff like that, so I did and Cody and I hit if off,” says Burow. “He's been an excellent mentor to me. I'm looking forward to following in his footsteps a little bit.”

“Erik certainly had the passion for it. He was super keen even in his early years,” recalls Creelman. “Just because somebody isn't from a ranch background doesn't mean they can't make an exceptional cow vet. It’s all about personality.”

“He seemed so mature and professional,” Creelman adds. “When he was trying to connect with me, he wouldn't email or text me. He would only want to have a phone conversation, called me Dr. Creelman. He was just so professional, right? I joked around with him that if he wanted to communicate with me, he had to do so by text, and he had to use emojis only and I'd figure the rest out. That relaxed him, and, yeah, we just started going out on calls.”

A month of farm calls with Kevin Breker

Burow also found strong mentors at Peace River Veterinary Services, where he started in May. It’s one of network of rural community practices owned by Mosaic Veterinary Partners, which Creelman co-founded, and a partner in UCVM’s Distributed Veterinary Learning Community (DVLC).

“I’m super excited to have him as part of the Mosaic team and get to watch him grow and develop, and become a cow vet,” says Creelman.

As his final practicum, Burow spent a month at the clinic, much of it with Dr. Kevin Breker, who has been practising in Peace River for nearly 40 years. “I knew I was going to be working here, but being a student for a month before allowed me to spend all of my time where I wanted to. And most of that was in the truck with Dr. Breker, going out to farm calls, and consulting calls, stuff like that. It's been a great month.”

Known as ‘the cow vet of the north,’ Breker was honoured earlier this year with the ABVMA’s outstanding mentor award.

“He's been a great mentor to me, but he's looking at retiring,” says Burow. “He does the bulk of the large animal work in this area and he's also looking to have one or two good veterinarians fill his shoes once he finally hangs up the reins.”

Burow to carry on a family tradition

Along with his passion for veterinary medicine, Burow is a dedicated military reservist, something he kept up while studying at UCVM. His father was a pilot in the Royal Canadian Air Force and his mother’s side “also has military service.”

“Most of my training was completed during my undergrad summers,” he says. “I would work a veterinary-related job for a portion of my summer, and then be gone to either Wainwright, or CFB Edmonton, or Gagetown, or Shilo, for another portion of the summer.”

Burow hopes to join another branch of the military in Peace River, the Canadian Rangers. “It’s kind of a family tradition more or less, so I feel obligated to continue that and give back to my country.”